The LEGO Group 1947's boardgame Monypoli was an unusual item. It was based on the theme of traffic safety and official traffic rules. The game included metal cars, wooden tokens, a wooden die and cup, cards, a traffic sign poster and a separate gameboard. 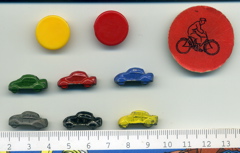 Retrieved from "https://brickipedia.fandom.com/wiki/Monypoli?oldid=1707934"
Community content is available under CC-BY-SA unless otherwise noted.