Marc Spector was a famed mercenary until a job in Sudan, where he witnessed fellow mercenary Bushman needlessly killing archaeologist Dr. Alraune in front of his daughter. Marc fought Bushman and was nearly killed in the process, ultimately stumbling upon a tomb unearthed by Alraune nearby. Dying just as he reaches a statue of the Egyptian Moon God Khonshu, Marc was resurrected by Khonshu and granted specialized weaponry and armor to serve him. Dubbing himself Moon Knight, the "Fist of Khonshu", Marc returned to the United States and began a crime-fighting career. He served on multiple Avengers teams, most notably Hawkeye's West Coast Avengers and Captain America's Secret Avengers.

It would later come to light that Steven Grant and Jake Lockley, two alternate identities created by Marc to further his crime-fighting goals, were in fact manifestations of Marc's DID dating back to his childhood. A fourth alter would emerge later in life: the masked businessman Mr. Knight.

More recently, after a falling out with Khonshu, Moon Knight established the Midnight Mission in Manhattan, a congregation that serves as a safe haven for weary travelers. 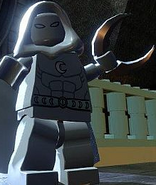 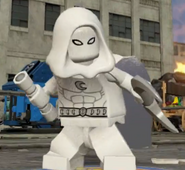 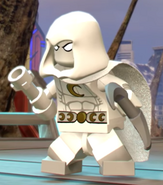