Morcia is the kingdom in which the theme Knights' Kingdom II was set. The country is at war with the neighboring kingdom of Ankoria, which is ruled over by the evil Lord Vladek.

King Mathias ruled Morcia for many years before Vladek took power. Mathias was thrown in a dungeon and Jayko, Danju, Rascus and Santis went to rescue him. Vladek was eventually overthrown, and Sir Jayko became the new king. In 2006 two new knights were introduced called Sir Kentis and Sir Adric who were rookies assigned to help. Vladek also now has two minions called Karzon and Dracus. Vladek was not able to beat the knights and retreated with his Shadow Knights.

Morcia is a land with varied terrain. At the south-west the country borders to a large body of water and features a curved shoreline with a peninsula and a bay. The north-western border is formed by a large mountain-range with a large swamp (the moorlands) to the south which is crossed by a rope bridge. Another map shows this swamp to be further to the east, while the "moorlands" are still at their former position.

According to the map shown in the building instructions, the two largest buildings in Morcia are the Castle of Morcia and the Citadel of Orlan that are situated at the north-eastern border and next to the shore respectively. South of the castle lies a plain were the Grand Tournament took place.

Through the western part of Morcia runs a river that comes from the northern mountains. It runs through the swamp, exits it at the south and later passes the Citadel of Orlan as it forms a waterfall. It then runs through the peninsula past the provinces Banteras and Talonjay before it finally flows into the sea. Other provinces are Aldendan, to the north of the castle and Orkosan at the eastern shore of the large bay (2004) but was shown to be on the other side of it in 2005.

Original designs included animal themed castles for the heroes. Santis' bear-themed castle was set in the mountains between Morcia and the Wastelands. The first design was set high in the mountains. Then it was changed so the Castle defended the path into the Wastelands. It was then repainted. However, it was later changed so that Santis came from Orkosan, a farmland province.[1] Castles for Danju (wolf-themed), Rascus (monkey-themed) and Jayko (hawk/eagle-themed). None of these concepts were ever used in sets,however.[1] 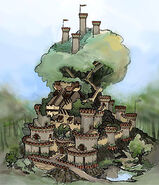 Ape castle environment mock-up
Add a photo to this gallery

The Grand Tournament Arena
Add a photo to this gallery