Mordor Orcs are tan-coloured, with brown hands. They have extremely dilated eye sockets with great orange eyes and have piercings on their left eyebrow and nose. Two lines indicate nostrils and their two front teeth are sharper than the others.

They wear an assortment of brown leather pieces over gray armor and they also wear brown pants.

When Sauron settled within Mordor he began breeding armies of Orcs, Trolls and other creatures to serve him. After amassing hordes of orcs, the Dark Lord made an attempt to defeat the Elven kingdom of Gil-Galad Ereinion but was defeated by the Last Alliance of Elves and Men. After their master's defeat, the orcs were scattered throughout the Misty Mountains, Mirkwood and Mordor. During the Third Age, Sauron was revealed to have used the guise of the Necromancer of Dol Guldur to hide himself and following a confrontation with the White Council, he fled to Mordor and reclaimed the dark land. In preparation for the War of the Ring, Sauron began once again to breed Orcs and made the Black Uruks as the elite force of his army.

In Isengard, Saruman, now under enthralled by Sauron's will, began to amass Orcs from the Misty Mountains under the banner of the White Hand in preparation for the War of the Ring. These orcs formed his workforce, building machinery, fueling furnaces, working the forges, breeding Uruk-hai, arming the soldiery and cutting down trees. The majority of the orcs was vanquished in the Battle of Helm's Deep and the Siege of Isengard, while the remainder fled.

Large hosts of orcs gathered within Mordor fought in the Battle of Pelennor Fields and later the Battle at the Black Gate, during which Sauron was defeated, causing the ground to crumble beneath the orcs, who fell in the abyss that came towards them. 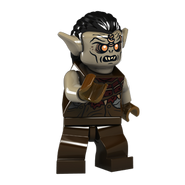 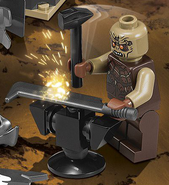 Throwing rocks into a basket

A Mordor Orc guarding the The Black Gate