Brickipedia
Register
Don't have an account?
Sign In
Advertisement
in: Class 3 articles, The Lord of The Rings minifigures, Minifigures introduced in 2012
English

Moria Orcs are minifigures from The Lord of the Rings theme released in May 2012. They only appear in one set, 9473 The Mines of Moria. In that set, one orc wields an orc scimitar and a shield, and the other has a flail, as well as a chain to control the Cave Troll.

Moria Orcs, unlike many of their kind, have jade-green skin, shown on their head and arms, but have gray hands. They wear armor plating on their torso with little tattered pieces of blood-red fabric. Their legs are just plain gray.

Their head has a sharp, sneering face with dilated pupils and light-yellow eyes, almost white. Their mouth is wide, bared, and shows clearly their sharp teeth. They come with black hair with a pair of jade-green ears.

The Moria Orcs were once elves, but were corrupted and mutilated by Morgoth, Sauron's predecessor and teacher. He created orcs to be the infantry in his army. After Morgoth was defeated, the orcs were scattered but later regrouped under the banner of Sauron. They made an attempt to defeat the free peoples of Middle Earth but they were stopped by Elendil, Gil-Galad, Elrond, Isildur and the last alliance of elves and men. After this battle, the orcs were scattered into the Misty Mountains and Mirkwood. In Mirkwood, they rallied to the Witch king's army and made a strike for Arnor in the Misty Mountains. They made war for the dwarves' delvings and caves. After winning the war on the dwarves the Moria Orcs created an empire whose capitol was in mount Gundabad in the north. The Fellowship of the Ring encountered Orcs of the Misty Mountains in the Mines of Moria. The orcs were hunted to extinction after the defeat of Sauron by Aragorn, Eomer and their armies 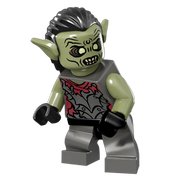 Back printing and alternate face without the forehead ring

The Moria Orc at the Toy Fair 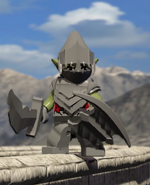 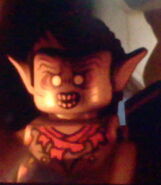 Deutsch Français Nederlands
Community content is available under CC-BY-SA unless otherwise noted.
... more about "Moria Orc"
RDF feed
Accessories
Flail, Sword, Shield, Chain +
Appearances
9473 The Mines of Moria (2) +
ArticleRating
3 +
Image
lor011.jpg +
InfoboxTemplate
Minifigure +
ShopDescription
Moria Orc A cruel and vile breed of … Moria Orc</br></br>A cruel and vile breed of creatures, the Orcs of the Misty Mountains invaded the Dwarf-realm of Moria. Skilled with weapons, they are the foot soldiers of Sauron. They are alerted to the Fellowship’s presence when Pippin accidentally knocks a bucket down a well. Daylight harms and blinds them, so they can't leave their caves. They are mortal, miserable creatures that want to destroy all in their path.es that want to destroy all in their path. +
Theme
The Lord of the Rings +
Title
Moria Orc +
Years
2012 +
Advertisement