Morro is a minifigure from the Ninjago theme who is the main antagonist of Season 5. He was a former student of Sensei Wu and the Elemental Master of Wind.

Morro's robed version has Severus Snape's hair, with a green streak dyed into it in the show. He has a transparent green face with a black half mask on it. His black cape is ragged. He has a dark green torso, similar to the original ninja Gi and with a ghost Golden Ninja emblem. His legs are transparent green and have a belt on them. Ghost Morro's head, torso, and leg pieces also have unique prints, but his face mask has been used for a number of other figures including Cole.

The Master of Wind

When Morro was a boy, he was homeless and ate food out of dumpsters. One day, he tried finding food in Sensei Wu's dumpster. However, Wu found him and gave him food from his monastery. Wu then trained Morro to become a ninja, after seeing his wind powers and realizing he was descended from one of the Elemental Masters. Wu assumed that he was destined to become the Green Ninja, a powerful warrior destined to defeat the Dark Lord. The Wind Master was obsessed with the title and for his final challenge, he needed to step near the Golden Weapons. If the weapons reacted with a green aura, it would confirm he is the Green Ninja. However, the Golden Weapons did not. Morro was then angry as he escaped from the monastery and fought the Grundle to prove the position. After being rescued by Sensei Wu, Morro informed him that he will find the tomb of the First Spinjitzu Master, what Wu could not, to prove he really is the Green Ninja. He was never seen afterward and his soul was banished to the cursed realm since he died.

In The Corridor of Elders, Garmadon sacrifices himself to the Cursed Realm, releasing the spirits of the Anacondrai generals. However, a dark cloud also appeared from the sky and headed into the screen, with the ghost of the Wind Master screaming "Morro!".

In Winds of Change, Morro possesses the Green Ninja and fights his former master and the ninja. During the Ninja's escape, he pursues him using the Morro Dragon.

In Ghost Story, The ninja still make their escape from Morro. The Morro dragon makes a blasted hole in the Destiny's Bounty 2.0 sending Kai out of the ship. Luckily Zane and Sensei Wu manage to rescue him, although they lost Sensei Wu's staff. Morro rushes to get the staff and manages to get it which gives him the opportunity to see the ninja's vessel hurtling down from the sky about to crash.

At Yang Tavern, he summons Wrayth back into Ninjago and sends him to defeat the Ninja.

In Stiix and Stones, Morro begins searching for the Scroll of Airjitzu; he traces it to the City on Water which is specifically located at Ronin's location. He summons Soul Archer to get to the scroll.

Both of them later hold Ronin hostage, but the ninja also came for the same thing. Morro then summons more of his Ghost Warriors to attack them. Ronin manages to get free by one of the Aeroblade's tips touching the rope which cut it. Ronin then finds the chance to escape and Morro and the Ninja chase after the scroll.

Later in the pursuit, Morro manages to get the scroll and escapes with it leaving the ninja chasing after him. The ninja slowly gets divided one by one leaving Kai the last one to chase Morro. Although, Morro was at a distance where he can't be reached and unlocks the technique of Airjitzu and escapes on his dragon leaving the Ninja helpless.

In The Temple on Haunted Hill, Morro heads to an unknown location about to attack Samurai X's Cave. He summons Bansha, Ghoultar, and Soul Archer to help him on the mission.

When Nya and Ronin arrive at Nya's base, they find out that Morro and the Ghost Generals have somehow made it to the cave first. The ghosts patrol the cave to make sure no one entered the cave. Nya then goes on to attack and summons her mech; Morro sends out his generals to attack the mech.

Later, Nya shoots out a sticky bomb on Morro which turns out to be the Allied Armor of Azure. Outraged, Morro sends out his ghosts to hold the mech down. The ghosts manage to (although Nya manages to escape) get the mech and transform it into the Mech-Enstein. Ronin and Nya manage to escape from being sliced by the mech. Although when Ronin was close to the mech, the Ghosts trap them. Then Nya used her power of summoning rain to ward off the ghosts making them retreat. Morro was the only ghost not to be affected by the rain.

An illusion of Morro was seen in Sensei Yang's Haunted Temple who lured them to the attic of the temple where he was revealed to be Sensei Yang in disguise.

In Peak-a-Boo, Morro and his ghost army travel to a snowy peak where the portal to the Cloud Kingdom is. Morro attempts to get to the top but was countlessly delayed by the ninja. When Morro reached the top of the peak, he saw the ninja get to the portal first by using their Airjitzu.

In Day of the Departed, Morro's spirit returned and animated a mannequin of him in the Ninjago Museum of History's new Hall of Villains exhibit, and he found himself joined by the similarly revived Samukai, General Kozu, General Cryptor, and Master Chen. Sensei Yang, whose magic and trickery of Cole had enabled their return, told the group that their new weapons were Departed Blades that could be used to dispatch one of their still-living foes so that they could remain in Ninjago rather than returning to the Departed Realm. Morro's chosen "target" was Wu, as he felt they had "left things unfinished." In reality, Morro no longer harbored a grudge against his teacher, but warned him of Yang's plan and then traveled with him to inform the Ninja after they had defeated their respective enemies, including Pythor. As they then left to aid Cole in his confrontation with Yang, Morro and Wu bid each other an amicable farewell, with Morro's spirit returning to the Departed Realm while his mannequin body was restored to its original state in the Hall of Villainy. Despite this more pleasant parting, his failure with Morro continued to weigh on Wu, who later envisioned Morro during a nightmare alongside others whom he felt he had failed over the course of his life. 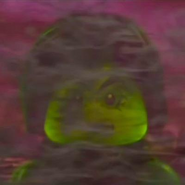 Morro in Ninjago: Masters of Spinjitzu. 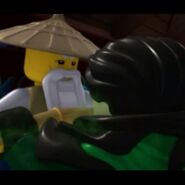 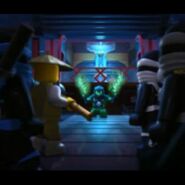 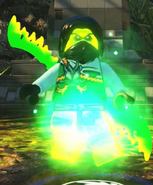