Morty Mouse is a Fabuland minifigure. He was released in 1979.

Morty Mouse has a grey mouse head, with white teeth, black nose with black whiskers, huge ears and a bit of hair. His eyes are black with two white pupils. He has a blue torso with black arms and black legs.

In 3717 Mouse Fishing at Dock Morty is seen with a white fishing cap.

Morty is named Lazy mouse by his friend, Billy Bear. Morty lives in a cottage, with his friend Cathy Cat. Morty works at the airport, in his spare time Morty likes to go fishing at the dock. 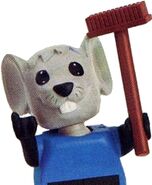 Morty Mouse with a White Cap.
Add a photo to this gallery
Retrieved from "https://brickipedia.fandom.com/wiki/Morty_Mouse?oldid=1838799"
Community content is available under CC-BY-SA unless otherwise noted.