Mr. DNA is a cartoon character who was used to explain the miracle of cloning in Jurassic Park and Jurassic World.

Mr. DNA was created by InGen to help visitors understand the processes involved in the creation of the dinosaurs on Jurassic Park. A film starring him and InGen's founder John Hammond would be played in a theater located in the park's Visitor Center before a tour. Mr. DNA also was used on the maintenance board of Jurassic Park'sGeothermal Power Plant and on a board telling how tall a person must be to ride the upcoming Bone Shaker roller coaster. After the Isla Nublar Incident of 1993 the cartoon character seemed to have been put out of service by his company for about a decade.

Mr. DNA was brought back by the Masrani Global Corporation for their new dinosaur park Jurassic World. He remained the same as his original counterpart, but two variations of him existed, one with only blue and white existed, representing the colors of Jurassic World's logo, and the other being red and white. Visitors could encounter him in the Hammond Creation Labwhere he served the same role as he did when he was initially created. 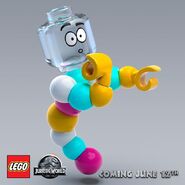