"A scientist specializing in cryogenics, Dr. Victor Fries froze his wife to prevent her death from a rare disease - but he was injured in his lab, and found himself unable to survive outside a sub-zero environment. As Mr. Freeze, consumed by anger, he uses frozen weaponry in a battle against the city of Gotham, and wears a refrigerated suit which gives him remarkable strength."
―Character introduction in LEGO Batman: The Videogame

Mr. Freeze (Dr. Victor Fries), is an enemy of Batman who teamed up with The Riddler in LEGO Batman: The Video Game and with The Penguin in 7783 The Batcave: The Penguin and Mr. Freeze's Invasion. He was redesigned and released in 2013 as part of the Super Heroes DC Universe theme.

Mr. Freeze has a transparent Insectoid helmet. Mr. Freeze's head is a white minifigure head exclusive to his minifigure. He has plain legs and a plain torso, which is bright blue with black hands. He has a black back accessory to attach his tanks (which are made up of two transparent light blue cylinders) to his back.

This variant is based on how he appears in Batman: The Animated Series, but considering the freeze gun, colors, number of air tanks and helmet shape is radically different .

He was redesigned in 2013 with the Atlantis diver helmet in sand blue and a light-blue visor. His face is still white but now his blue eyes are revealed, as he is not wearing goggles, more lines to give the face detail, and an angry expression. His torso, hands, and hips are black with machinery printed on the former. He has back printing depicting the machinery on his back. His limbs are blue.

His freeze gun is made from a sci-fi blaster, with a trans blue cylinder, capped with a silver flat tile. a black disc and a silver cone make up the nozzle, with a blue beam coming out for a freeze blast.

This variant loosely based off how he appears in the 2011 video game Batman: Arkham City, with the biggest difference being that he is lacking his iconic red goggles.

A microfigure version of him will be included in 50003 Batman. It is pale blue and similar to the Super Heroes variation in design, but with the lack of the helmet-armour combo piece and he has red goggles over his eyes and a serious expression, like the original 2006 Batman variation.

This variant of Mr. Freeze is based on Otto Preminger's portrayal in the 1960s television series. He has a light blue head with dark red eyebrows and an evil grin. His body is a darker blue and shows a simple uniform with pockets, a belt, and the front of his protective suit on the top of his torso, showing the ice collar that keeps him alive. His hands are light grey.

This variant is loosely inspired by the Arnold Schwarzenegger portrayal of Mr. Freeze from the 1997 film "Batman and Robin". His is blue, with a disparaging expression and two red eyepieces in lieu of his classic goggles. He has a new light blue armor piece which features silver plating and blue lights printed on it. The armour also allows the classic jar piece to be placed on it to form Freeze's classic domed helmet. His torso is dark blue with grey tubes printed on, and also features some ice seeping through the plating. He also features sky blue pads printed on the side and a cyan belt. His legs are dark blue with blue padding and silver metal toes printed on. His arms are dark blue and his hands are black. He is equipped with an oversized freeze gun that can also be held by his mech suit.

This Freeze features the same helmet as the 2013 version. His head is white with blue skin detailing, and he wears his traditional goggles. His armor underneath is black and grey with purple detailing. His torso and back feature armor printing, and his hands are purple. He carries a simplified freeze gun.

The 2019 variant of the character is inspired by the character's New 52 incarnation in Scott Snyder's Batman series. Here he has a sleeveless life-support suit and a colourless, transparent dome over his head as well as a support system on his back.

In LEGO Batman: The Videogame, Mr. Freeze is identical to his appearance in 7783 The Batcave: The Penguin and Mr. Freeze's Invasion and 7884 Batman's Buggy: The Escape of Mr. Freeze, and his ice gun is the one he uses in 7783, except without the tube in most cases.

Mr. Freeze is able to safely walk through toxins, is able to freeze enemies and sparkling liquids, and has super strength. Mr. Freeze's Ice Gun acts as both a ranged and a melee weapon.

In LEGO Batman 2: DC Super Heroes, Mr. Freeze's appearance changed very little. His face now has no lines and his goggles appear to be smaller. His gun is a different design and his capsules are green rather than white. He has printing under his armor, but this is only visible when using this part in the character creator and when he falls apart after being defeated while in use. Everything else remains the same. He is still able to freeze enemies and water. His appearance is based on his one in LEGO Batman: The Videogame instead of his Super Heroes variant due to the fact that his set was released after the game.

Mr. Freeze appears with his 2013 variant in two sidequests, the first of which is required to progress into the Watchtower's Hangar area. The second time, he appears on Qward, asking for fuel to power his refrigerator. Upon completion of this quest, he is unlocked. He has an exaggerated European accent that is difficult to identify, which is likely a reference to Arnold Schwarzenegger's portrayal of him in the 1997 film Batman and Robin.

Dr. Victor Fries was a mere Gotham City scientist who used cryo-stasis technology to cryogenically freeze his wife Nora, who had a rare disease, so he could have more time to save her. However, an accident in the laboratory caused his body temperature to revert to below zero and as a result, he was forced to wear a refrigeration suit to survive the mutations. Fries then deemed himself "Mr. Freeze" and staged robberies in order to fund his project. He also stole diamonds in order to power up his suit. In addition to his cryotechnic genius, Mr. Freeze wields an ice-powered gun that freezes targets.

In the 1966 television series, Mr. Freeze was known as Dr. Art Schivel. His body temperature was accidentally lowered by a freezing solution used by Batman, and Freeze became his enemy in an attempt to get revenge.

In LEGO Batman: The Videogame, Mr. Freeze was a part of The Riddler's group, which also consisted of Clayface, Poison Ivy, and Two-Face. Mr. Freeze assisted The Riddler in retrieving a Freeze Cannon which he needed to rob the Gotham City Gold Reserves. When the Freeze Cannon was secured, Mr. Freeze insisted on staying in the factory to unleash the Freeze Girls as his minions. He was then defeated and captured by Batman and Robin and sent back to Arkham Asylum.

In console versions, Mr. Freeze created obstacles for Batman and Robin by freezing a few areas around Arkham Asylum, but was trapped behind glass so he was unable to hurt them directly. He was later one of the many villains who escaped the Asylum. He is located at the Observatory, on the South Island of Gotham City, and is available to purchase for 500,000 studs after he is defeated.

In portable versions, Mr. Freeze is a boss in the level Arkham Asylum. His minikit can be found later in the same level.

A cryogenic experiment gone wrong permanently lowered Dr. Victor Fries’s body temperature, turning him into the sub-zero super-villain Mr. Freeze. Forced to wear a special suit to survive, the cold-hearted and nearly emotionless crook uses his scientific skills and freeze gun to bring a chill to Gotham City wherever he goes. Good thing Batman is always there to bring the heat! Bat-Fact: Originally called himself “Mr. Zero,” but thought it didn’t sound cool enough.

Mr. Freeze and The Riddler 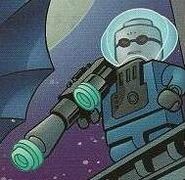 His appearance on the comic 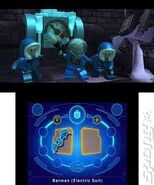 2013 front and back printing (alongside Aquaman) 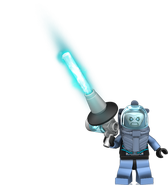 Mr. Freeze in The LEGO Batman Movie with with The Penguin, The Riddler, Killer Croc, Catwoman, Bane, Clayface, Poison Ivy, Harley Quinn, Two-Face and The Scarecrow 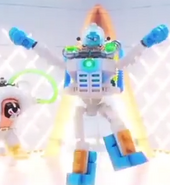 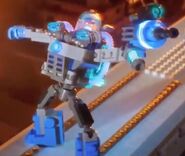