Mr. Gold is coloured almost completely in chrome golden. He has a golden top hat, a golden face, a golden torso that looks like a tuxedo, and golden legs. His hands which are white, are the only things that are not gold.

A promotional image for Mr. Gold. 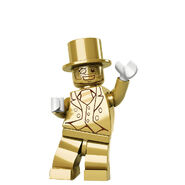 His page in the LEGO Minifigures: Character Encyclopedia.

Mr. Gold on the back of the Series 10 pamphlet.

Deutsch Français
Community content is available under CC-BY-SA unless otherwise noted.
... more about "Mr. Gold"
RDF feed
Accessories
Golden top hat
Golden Staff +
Appearances
71001 Minifigures Series 10 +
ArticleRating
2 +
Image
Monsieur or.png +
InfoboxTemplate
Minifigure +
ShopDescription
“I dare say it's your lucky day!”<br … “I dare say it's your lucky day!”<br />Rumor has it that somewhere out there is a very special Minifigure known as Mr. Gold. Shining and golden from the top of his tall top hat to the tips of his toes, he may be discovered in all sorts of unexpected places, but he never seems to turn up exactly when and where you’re looking for him. According to legend, Mr. Gold will bring you luck if you happen to spot him… or is it that you’ll need to have a lot of luck to find him? Either way, everybody wants to find the mysterious Golden Minifigure – but only a fortunate few will succeed!– but only a fortunate few will succeed! +
Theme
Minifigures
Series 10 +
Title
Mr. Gold +
Years
2013 +
Advertisement