Brickipedia
Register
Don't have an account?
Sign In
Advertisement
in: Class 2 articles, Minifigures (theme), Minifigures introduced in 2013,
and 2 more
English

"Should I build or deconstruct today?"
―Mr. Good and Evil

Mr. Good and Evil is a Minifigures Series 9 minifigure released in January 2013. He also appears in LEGO Minifigures Online.

Mr. Good and Evil wears a black top hat with printing of scuffs, scratch marks, and a rip on it. His face is the standard bright yellow minifigure skin colour, with a mild expression and a sideburn on the right side. The left side of his face is sand green and has a maniacal smile, with clenched pointed teeth, a long, thick sideburn and a bushy black eyebrow over a large, dark green eye. His left hand is sand green as well. The minifigure's torso has printing of a black suit with a plaid green button-down vest underneath and a tie and white shirt under that. The left side of the suit is tattered, ripped and wrinkled, in contrast to the neat right side. The legs are black with printing of a belt on the hips. The left pants leg is ripped in two places. One on the thigh and the other where the knee would be. 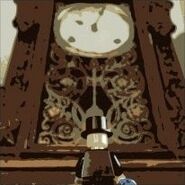 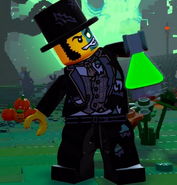 Deutsch Français
Community content is available under CC-BY-SA unless otherwise noted.
... more about "Mr. Good and Evil"
RDF feed
Accessories
Conical Flask (Purple)
Top hat (Black) +
Appearances
71000 Minifigures Series 9 +
ArticleRating
2 +
Image
GoodNEvil.jpg +
InfoboxTemplate
Minifigure +
ShopDescription
“Should I build or deconstruct today?”' … “Should I build or deconstruct today?”<br />Transformed by a laboratory accident, Mr. Good and Evil has been split into a good side and a bad side. Half of him wants to help people and solve problems, while the other half craves nothing but chaos and destruction.Because both halves are in the same body, they’re constantly trying to sabotage each other. As a result, everything good that he tries to do ends up at least a little bit bad, and everything bad comes out a little bit good. According to the other Minifigures, it actually makes him a pretty decent neighbor…if you don’t mind all of the arguing!"bor…if you don’t mind all of the arguing!" +
Theme
Minifigures
Series 9 +
Title
Mr. Good and Evil +
Years
2013 +
Advertisement