Mrs. Black is a character in LEGO Harry Potter: Years 5-7.

Walburga Black (1925—1985) was a pure-blood witch. Walburga was probably raised in Grimmauld Place, since she called it the "House of my fathers". She married her second cousin Orion Black, thus her married name was the same as her maiden name, and had two children, Sirius and Regulus Black. She died in 1985; her portrait still remains at 12 Grimmauld Place. 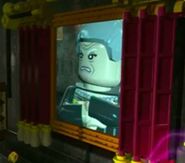