Mrs. Norris is Argus Filch's pet cat. Mrs. Norris appears in 3862 Harry Potter Hogwarts, where she had no printing, LEGO Harry Potter: Years 1-4, and 4842 Hogwarts Castle. Although the preliminary figure for this set did not have it, the final Mrs. Norris figure has printing for her face and eyes.

In Harry Potter's second year, Mrs. Norris was petrified (she was not killed since she saw the Basilisk's reflection in the water), along with Penelope Clearwater, Colin Creevey, Justin Finch-Fletchley, and Hermione Granger. Harry is convinced that she can see through invisibility cloaks just like Professor Moody. 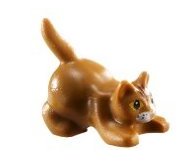 Mrs. Norris without the printing 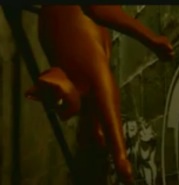