Ms. Cuffs wears a bright blue police uniform with a gold badge, and earth blue pants. She has a smiling face with lipstick and eyelashes, and her hair is a dark orange (bright orange in LEGO Worlds) Mini Wig No. 4.

Ms. Cuffs is the sister of Ms. Crook, and the two siblings share a complicated relationship due to being on opposite sides of the law. As a a rookie police officer, Ms. Cuffs typically does paperwork at the police station; however, she spends most of that time daydreaming about arresting villains instead of doing paperwork. When on patrol, she is typically chasing after Ms. Crook.[1]

At the police station, a crook breaks Mr. Crook out of the police station while another crook makes his escape. With no time to lose, Ms. Cuffs, Police Officer (Serious), and two other police officers chase after them.

In Follow That Easter Egg!, Katie is a rookie police officer receiving her first job, along with fellow rookie Ryan and the police dog Reno. On Easter Sunday, the police chief assigns them to drive a priceless golden egg from the bank to the museum, using the Prisoner Transporter. A downed traffic light forces them to stop, which allows Barry and Larry to steal the golden egg. Katie and Ryan chase the crooks through the park, where she finally finds them eating chocolate eggs and arrests them.

Ms. Cuffs is a protagonist in the main campaign of LEGO Quest & Collect. She travels along with Scarlet and Kai to free Brick World from the control of the Mad Creator. She is a Physical Attacker with the skills "Requesting Backup!", "Surrender!", and "Freeze!" 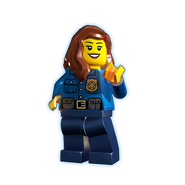 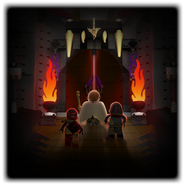 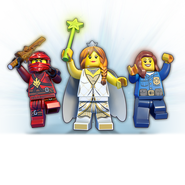 Ms. Cuffs with Scarlet and Kai