US Air Force Special Operations Colonel Carol Danvers was the youngest security captain in NASA's history when she befriended Dr. Walter Lawson, really the undercover Kree warrior Mar-Vell (known to Earth as Captain Marvel) and became entangled in the schemes of the Kree Empire. During a fight between Captain Marvel and his enemy Yon-Rogg, Carol was exposed to a form of radiation generated by the Kree Psyche-Magnitron, a device that could turn imagination into reality. When the device exploded, Carol's wish to be powerful enough to protect herself and an injured Mar-Vell came true as it altered her genetic structure and effectively made her a half-Kree superhuman. She gained the powers of flight, super-durability and super-strength along with energy projection and heat absorbtion. Originally super-heroing under the name Ms. Marvel (a nod to her friend Mar-Vell) Carol took over the mantle Captain Marvel after Mar-Vell's death at Captain America's urging. 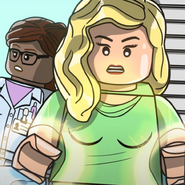