Ms. Marvel (Kamala Khan) is a Marvel Super Heroes minifigure who appears in LEGO Marvel's Avengers. She was physically released in 2017.

Kamala Khan is a Pakistani-American teenager from Jersey City, New Jersey. Born after her family moved there from Karachi, Pakistan, Kamala grew up struggling to balance life as an American teenager with her parents' expectations. However, in the aftermath of the "Inhumanity" event, Kamala was exposed to the Terrigen Mists, which awakened her latent Inhuman genes and granted her powerful shapeshifting abilities. Inspired by her idol, Carol Danvers, she becomes a superheroine by the name Ms. Marvel, vowing to protect her home city from a growing population of super-villains.

Though she became a member of the Avengers for a time, she grew frustrated with the team's burecracy and formed her own team of teenage heroes, the Champions. Her teammates include Miles Morales, Amadeus Cho, Nova, Ironheart, Viv Vision, and a younger time-displaced version of Cyclops (Marvel). 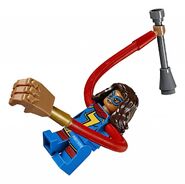 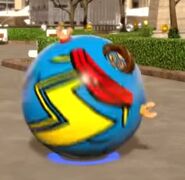