Brickipedia
Register
Don't have an account?
Sign In
Advertisement
in: Class 2 articles, Minifigures (theme), Minifigures introduced in 2011,
and 7 more
English

Has gold scorpion in the mini figures VIP Lego set

The Mummy is a Minifigure who was released in 2011 as part of 8803 Minifigures Series 3. It was one of five minifigures chosen for a re-release within the set 850458 VIP Top 5 Boxed Minifigures.

His head is mostly covered but part of his head is seen, which is green in preliminary pictures. His body and his legs are covered, and his hands are white. His eyes are yellow-green in colour with white pupils.

The Mummy appears in The LEGO Movie. He is among the Master Builders that meet in Cloud Cuckoo Land.

In The LEGO Batman Movie, the Mummy is among the inmates of the Phantom Zone alongside Lord Vampyre and a Swamp Creature. 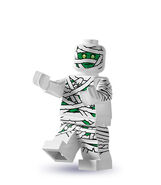 The Mummy's back printing 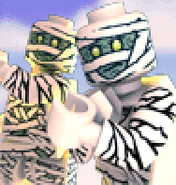 The Mummy as seen in The LEGO Movie. 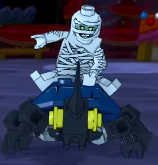 The Mummy in LEGO Dimensions

The Mummy cameo in The LEGO Batman Movie 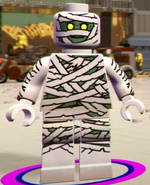 Deutsch Français
Community content is available under CC-BY-SA unless otherwise noted.
... more about "Mummy (Minifigures)"
RDF feed
Accessories
Dark Red Scorpion +
Appearances
8803 Minifigures Series 3
850458 VIP Top 5 Boxed Minifigures
The LEGO Movie +
ArticleRating
2 +
Image
Mumcols3.jpg +
InfoboxTemplate
Minifigure +
ShopDescription
“Zappo!” The Mummy’s favorite thing … “Zappo!”</br></br>The Mummy’s favorite thing to do is put ancient mummy curses on people. He just loves it when you wake up with slimy frogs in your bed, or suddenly find your shoelaces tied together, or have your toast always fall on the floor with the butter-side down.</br></br>But the Mummy doesn’t really mean any harm, and he’d be surprised if he ever found out that people thought he was being mean to them. As far as he knows, putting curses on people is just what mummies are supposed to do!e is just what mummies are supposed to do! +
Theme
Minifigures
Series 3 +
Title
Mummy +
Variations
Has gold scorpion in the mini figures VIP Lego set +
Years
2011, 2014 (The LEGO Movie) +
Advertisement