Mungus is the King of the Mammoth Tribe, Maula's son and Mottrot's brother, and will appear in Summer of 2014 in the Legends of Chima theme. He is very strong, yet very childish as he is seen playing with snow and making snow-angels. 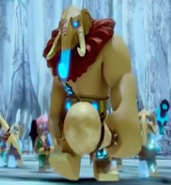 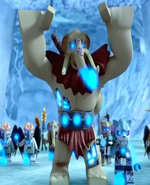 Français
Community content is available under CC-BY-SA unless otherwise noted.
... more about "Mungus"
RDF feed
Appearances
70144 Laval Fire Lion +
ArticleRating
4 +
Image
5702015124041_D.jpeg +
InfoboxTemplate
Minifigure +
ShopDescription
Mungus is the biggest and strongest warrio … Mungus is the biggest and strongest warrior in the Ice Hunter tribes, easily twice the size of anyone else. He’s so big that it took three CHI orbs to wake him up from his frozen sleep. Mungus can flip over a Rhino tank without even trying hard and defeat a troop of Lions all by himself. He is actually a lovable sort but not very bright, and can’t do much of anything unless his mother, Maula, tells him how to do it. He’s sweet, friendly, and happy all the time – unless Maula tells him to attack something, in which case he charges forward and crushes it flat.se he charges forward and crushes it flat. +
Theme
Legends of Chima +
Title
Mungus +
Years
2014 +