Music Meister is a Super Heroes minifigure who appears in LEGO Batman 3: Beyond Gotham and LEGO DC Super-Villains.

Music Meister was bullied as a child because he sang in a choir. But he soon discovered that when he sang, he could hypnotize people. He thus uses his newly discovered talents to control the people that had bullied him and plans to "settle the score," by using the many people who he hypnotizes to gain power and money. 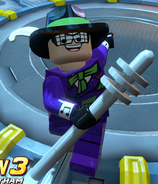