Quentin Beck was a special-effects technician, who had high hopes in business. Due to lack of recognition, but experience he thought to become an affective supervillain, naming himself Mysterio, and claiming he is a wizard and using special-effects as his "magic powers".

Quentin Beck claims to be from another dimension known as Earth-833 whom has a mission from an alternate reality to stop the Elementals with the help of S.H.I.E.L.D. and Spider-Man. However this story was a lie and the truth is he was causing death and destruction with drones and holographic imaging. 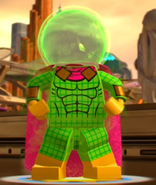