Nagini is an animal who appears in LEGO Harry Potter: Years 5-7 [1]. Nagini is Voldemort's servant, as well as his sixth Horcrux. Nagini was destroyed by Neville Longbottom during the Battle of Hogwarts.

Nagini (d. May, 2 1998) was a human (or possibily a witch) permanently transformed into a long, green female snake, and she was the servant of Lord Voldemort, with whom she had a special bond. She also became a Horcrux, after her master killed Bertha Jorkins in 1994. After Voldemort's initial downfall, he used Nagini's venom as one of the ingredients for Rudimentary Body Potion in order to regain strength, which eventually led to his rebirth. In 1995, she attacked Arthur Weasley, but he managed to survive. During the Second Wizarding War, she had to be destroyed in order for Voldemort to be finally defeated. Nagini was decapitated by a sword-wielding Neville Longbottom in 1998, and was the last Horcrux to be destroyed. 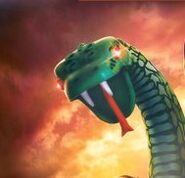