Nakia is a Marvel minifigure released on 2018.

Nakia was descended of a gentle fisherman of Q'Noma Valley in the African nation of Wakanda. From an early age, she was groomed, as many girls are, to be one of the "Adored Ones," an order of women known as the Dora Milaje and serving as concomitants or wives-in-training for the king of Wakanda. The order of the Dora Milaje was established to promote harmony between Wakanda's many rival tribal factions. They also perform the role of the king's deadliest bodyguards and most faithful, most trusted servants.

By age 14, Nakia was accepted into the order, and spent the rest of her life growing up in the Royal Palace of Wakanda enjoying a childhood most native tribalists could only dream of. During this time, she became increasingly obsessed with her king, the hero known as the "Black Panther", fantasizing openly about marrying him. At one point, she even threw herself fifty feet into a shallow pool to get her king's attention. The Panther administered mouth-to-mouth resuscitation to revive her, to the young teen's delight.

Nakia is a member of the War Dogs and T'Challa's lover, who was often sent on missions around the world, witnessing the hardships experienced by many people and growing the belief that Wakanda should actively help them. She was pulled out of an assignment to attend the Incoronation of T'Challa and took part in a mission in order to arrest the criminal Ulysses Klaue. Following their failure to apprehend him, Nakia exiled herself when Erik Killmonger took the throne of Wakanda. She reunited with T'Challa in Jabari Land and assisted him in reclaiming the throne from Killmonger. As T'Challa decided to open Wakanda to the rest of the world, Nakia would oversee the humanitarian policy of Wakanda. 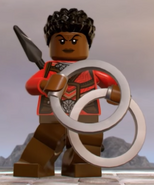