Narcissa Malfoy is a Harry Potter minifigure based upon the character of the same name from the Harry Potter Universe.

Narcissa has a dual coloured hairpiece (brown with white blonde streaks), a dress piece instead of normal legs, and a double sided head (one side has a passive expression, while the other has an angry expression). She has a black wand as an accessory. In the movie her hair is very different (black with blonde streaks and in a different style).

Narcissa Malfoy, born in 1955 was a pure-blood dark witch, the wife of Lucius Malfoy and the mother of Draco Malfoy. She was the youngest sister of Bellatrix Lestrange and Andromeda Tonks, who affectionately nicknamed her "Cissy". Although never officially a Death Eater herself, Narcissa believed in the importance of blood purity and supported her husband in following Lord Voldemort during the First and Second Wizarding War. This changed, however, when her son's life was put in jeopardy by The Dark Lord Voldemort. Narcissa did whatever it took to protect her family, including lying to Voldemort about Harry Potter being dead during the Battle of Hogwarts, an act which saved the Malfoys from being sentenced to Azkaban following the end of the war.

Narcissa on display at Toy Fair 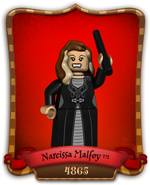 Draco Malfoy (left) with his mother, Narcissa (right) in the second video game

The back of Narcissa's figure