"We are here to help."
―Evo's first line
"I'm bailing out of the Turrent Machine!"
―Evo

Nathan Evo is a Hero Factory character introduced in 2011. He specializes in communications, and is a member of Alpha team, having been present on the Ordeal of Fire, Breakout, Brain Attack and Invasion from Below missions.

Evo has a new type of yellow legs. He has a black skeleton torso with a new type of armor with hero factory's logo. His arms are a new mold. He has a red head with an helmet molded after his breakout face.

Nathan is the strongest of the new heroes and operates as Heavy Artillery for the team. He was built in the 2.0 upgrade and fought the Fire Villains on Tanker Station 22.

In Breakout Evo is more like a rookie slightly unsure of himself, as he asks Furno for help several times when looking for Toxic Reapa. At the end of the first stage of Breakout, he fights Black Phantom’s Arachnix Drones along with Surge, Stormer, and Furno, while Rocka fights Black Phantom.

in Brain Attack Evo was assigned by Furno to stop the Aquagon that were invading the sewers of Makuhero City. Here, Evo put his Tornado Staff to good use as he blew away several Aquagon. When the Hero Factory was breached, Evo went to surface where he, Bulk, Furno, Breez, Stormer, and Bulk found a brain controlled Surge and an army of Blank Robots. Evo fought the Robots until they were deactivated by Surge.

In Invasion from Below when a drill crew was working on building a new tunnel under ground for Antropolis, the drill, and the workers were soon reported missing. Evo was called to the scene. He was attacked by several creatures of an unknown origin. Evo then was aided by his team, in battle machines, he recived new one, so he could fight as well. They weren’t battling the beasts for long before Stormer, Surge, and Furno were kidnaped like the workers were. But then, Breez communicated with the mother of these beasts, convincing it they meant no harm. Breez told the mother they would take their friends and leave. 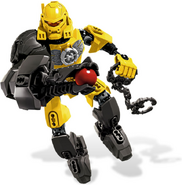 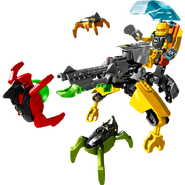 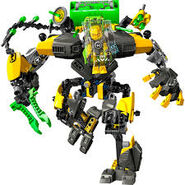 Evo XL Machine
Add a photo to this gallery
Retrieved from "https://brickipedia.fandom.com/wiki/Nathan_Evo?oldid=1841596"
Community content is available under CC-BY-SA unless otherwise noted.