Nebula is a Marvel Super Heroes minifigure that was released in 2014.

Nebula is based off of the MCU version of her character from the Guardians of the Galaxy film-series. She has four different variants (one of which is a mighty micro figure) but she is distinguished by having blue skin, a cybernetic left-arm, no headpiece and a typically purple/magenta colour scheme.

A cyborg assassin of the alien species known as the Luphamoids, Nebula is a complex character in the Marvel-Cinematic Universe as she starts out as a villain but overtime becomes an anti-hero.

Nebula was one of the adopted children of the mad titan Thanos, an alien-warlord obsessed with death. Thanos was insane, abusive and obsessed with making his children perfect killers so he often pinned Nebula against her older sister Gamora who was Thanos's perfect child. Out of fear for their father's wrath, the sisters were forced to fight with Gamora always winning and every time Nebula lost, Thanos would painfully remove a piece of her body and replace it with a cybernetic prosthetic. As Gamora never suffered this form of abuse, never defended Nebula out of fear for Thanos and was their father's favourite, Nebula developed a complex hatred for Gamora.

In the first Guardians of the Galaxy movie, Gamora defects from Thanos and robs him of one of his prized Infinity Stones prompting Thanos to make Nebula hunt her down alongside the Kree Extremist known as Ronan the Accuser. After fighting with Gamora and the rest of the Guardians, Nebula found her prosthetics badly damaged and was forced to retreat.

By the second Guardians of the Galaxy, Nebula defected from Thanos and found herself captured by the Sovereign. Nebula was eventually taken from the Sovereign by the Guardians, supposedly to collect a bounty on her head. After an ambush from Yondu and his Ravagers, only for them to be mutinied by Taserface. Nebula struck a deal with Taserface in order to get her own ship and hunt down Gamora which she did in hopes of killing her sister. However after a long fight between the two of them, the two finally started communicating with one another about their feelings towards their horrible up-bringing and how Nebula hated Gamora for never defending her against Thanos but came to understand why and the two made amends. After this, Nebula aided the Guardians in taking down Ego the Living Planet and then went off on her own with the intent of killing Thanos for his crimes. 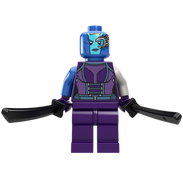 Nebula's front and back printing.