Neville Longbottom was a student in Harry Potter's year.

He was in the Gryffindor house. Neville was a close friend of Harry's. He was clumsy and had a pet toad named Trevor who always was trying to run away. He wasn't really good at magic at first, (except Herbology) but later, when Harry taught Defense Against the Dark Arts in Dumbldeore's Army, he became one of the best. Neville lives with his grandmother because his parents were tortured by Bellatrix Lestrange until they lost their minds. Neville was also one of six students to fight at the Department of Mysteries with his friends, Harry Potter, Ron Weasley, Hermione Granger, Ginny Weasley, and Luna Lovegood. He destroyed the horcrux snake Nagini with Godric Gryffindor's sword in 1998. In the video game he has Trevor and a spade for his special abilities.

In LEGO Harry Potter: Years 1-4, Neville has the same face, cape, and hair-piece as his original variation. However, instead of using his 2004, he has 2001 robes recoloured dark-grey. 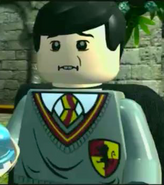