Nick Brick is the serious detective of the Police force from LEGO Island, and appears in all three video games of the LEGO Island trilogy.

Nick Brick wears a black hat (originally a Mini U.S. Cap in LEGO Island, later switched to a Mini Cap in the sequels), a black police detective jacket over a white shirt and blue tie, and blue pants. In the video game Island Xtreme Stunts, Nick wears black pants instead of a blue pair.

Nick Brick has a great memory and loves doughnuts. Laura Brick is his sister. Nick is occasionally seen at the race track, handing out speeding tickets to the four bicyclists. He also uses his motorcycle to patrol the island. His nose is blocked and he cannot smell anything. He lives at the police station.

In the video game 5731 LEGO Island, Nick and Laura Brick assist Pepper Roni in re-capturing the Brickster after he escapes from jail. In the video game 5774 LEGO Island 2: The Brickster's Revenge, Nick Brick is less involved, but does deputize Pepper Roni to give him permission to use the police helicopter to travel to Adventurers' Island in order for Pepper to find more of the pages for the Constructopedia. In the video game Island Xtreme Stunts, he gives Pepper quite a few different tasks: Pepper can get his driver's permit from him, but Nick also allows him to do crime scene unscrambling in minigames.

Early art for Nick Brick from the orginal LEGO Island

Several designs for the main characters of LEGO Island, including Nick Brick

An early render of Nick Brick for Island Xtreme Stunts 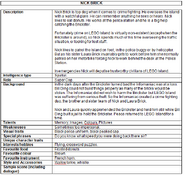