Nick Fury Sr. is a character that appears in the game LEGO Marvel Super Heroes.

Nick Fury Sr. has blue arms, a blue torso, and a flesh-colored head. His torso is printed to depict a S.H.I.E.L.D. uniform. His head has cheekbones, a black eye with a white pupil, a black mouth, black eyebrows, and an eye patch covering his left eye. Other than his eye patch, his head printing is very similar to that of Bruce Wayne's 2012 variant. Nick Fury Sr. also features a brown slicked-back hairpiece.

The eldest of three children, Nicholas Joseph Fury grew up in Depression-era New York City with his brother Jacob and sister Dawn. Fury's mother died while he was very young and his father Jack Fury, an American pilot who joined the British war effort during World War I, remarried and the children were raised by his stepmother in lieu of Jack Fury's own early death. It wouldn't be until Nick Fury became a soldier himself overseas that he would learn of his father's military service. Living in the tough streets of Hell's Kitchen, Fury soon became fast friends with Red Hargrove,[18] whom he helped keep out of trouble. Fury himself was no stranger to trouble, but more than often confined it to the boxing ring where he would bout, or in the Police Athletic League where he became one of the finest marksman. Fury served as S.H.I.E.L.D.'s director for many years. At his side were fellow Howlers Dum Dum Dugan and Gabe Jones, as well as long-time love, the beautiful agent Contessa Valentina Allegra de la Fontaine.His command of S.H.I.E.L.D. coincided with the ascension to Supreme Hydra by Fury's old WWII nemesis, Baron Von Strucker. Fury served S.H.I.E.L.D. both as administrative head and as field commander. His fearless leadership saw the organization through myriad crises and helped it rise to become the world's premier covert-operations agency. Fury and S.H.I.E.L.D. thwarted numerous major threats to the world's freedom launched by such groups as HYDRA and the Zodiac - headed at one time by Scorpio, an LMD of Fury's brother Jacob.Fury also assisted Earth's superheroes in cases, and S.H.I.E.L.D. spearheaded Earth's defenses during many of its worse crises.

Following his removal as Director of S.H.I.E.L.D. on the heels of his Secret War in Latveria, Colonel Nick Fury was forced to go underground. After going into hiding, he was able to reignite his passions with his old flame, Contessa Valentina Allegra de la Fontaine. Learning that Val was attempting to steal SHIELD passcodes from him and kill him, Fury shot and killed her. On her death, however, she revealed her true nature: she had been replaced by a Skrull impersonator.

Recognizing that Earth was being invaded by alien sleeper agents hidden among the society, Fury have assembled a team of Secret Warriors to defend it. The Secret Warriors recruit were a varied lot. Fury chose them not only for their competence, but also for their relative anonymity: he knew that obscure heroes would be ones least likely to be targeted for replacement by the Skrulls.

Nick Fury Sr., was a member of the Howling Commandos and founder of S.H.I.E.L.D. He was also a friend of Dum Dum Dugan and Captain America. 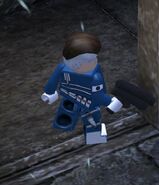 Back of Nick Fury Sr.