Brickipedia
Register
Don't have an account?
Sign In
Advertisement
in: Class 3 articles, Harry Potter Minifigures, Fantastic Beasts and Where to Find Them,
and 5 more
English

Harry Potter, Fantastic Beasts and Where To Find Them

Nifflers are Harry Potter animals that were introduced in LEGO Dimensions in 2016.

A Niffler is a fictional creature with a long snout and a coat of black, fluffy fur. They are attracted to shiny things, which make them wonderful for locating treasure, but this also means that they could wreak havoc if set loose indoors.

Fantastic Beasts and Where to Find Them

Newt Scamander owned a niffler, which twice escaped from his suitcase during his visit to New York in 1926 and tried to rob both the Steen National Bank and a jewel shop of numerous valuables.

During the 1994–1995 school year, Hagrid used them as part of the Fourth years Care of Magical Creatures class. Prior to class he hid Leprechaun gold in the earth in front of his hut. He paired each student with a Niffler and promised a prize to whoever found the most gold. Ron Weasley asked Rubeus Hagrid if they could buy these Nifflers as pets, and with knowledge, Hagrid said his mum wouldn't want one because they wreck houses, but this was not a definitive "no". This means there is a very good chance that wizards can purchase Nifflers. When Hagrid caught Gregory Goyle pocketing the gold, he explained that trying to steal it was pointless, as Leprechaun gold was worthless because it disappeared after a few hours. Ron's Niffler found the most gold, so Hagrid rewarded him with an extremely large slab of chocolate from Honeydukes.

During Dolores Umbridge's tenure as Headmistress of Hogwarts School of Witchcraft and Wizardry, Lee Jordan used a Levitation Charm to levitate two Nifflers through her office window to wreck the place. Umbridge blamed Hagrid for it, and this did not help him in the least during her Hogwarts High Inquisitor inspections. 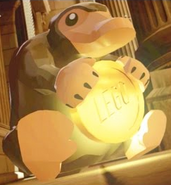