"Holy cheese and crackers, Batman! Woah, where did that come from?"
―Nightwing in LEGO Batman 3: Beyond Gotham

Dick Grayson, or alias Nightwing, is an ally of Batman. He was originally introduced in 2006 in the set 7785 Arkham Asylum. Nightwing would remain exclusive to that set for seven years before he reappeared as a microfigure in 50003 Batman, which was never made due to discontinuation of LEGO Games. He made another full appearance as a minifigure based on the New 52 in 76011 Batman: Man-Bat Attack during January 2014.

The first Nightwing minifigure's black hairpiece is wild, spiky, and reused from the Exo-Force theme. He wears a mask that slants downwards from the sides, curves upwards from the bottom, spikes upward at the nose, and both up and down at the sides. His eyes are white and ovular and he has a smile. His torso is black with his blue "v" logo on the chest. Dark blue and grey lines are used to give the sense of his suit's muscular cut against his body. His arms are coloured blue, continuing from the "v," and his hands and legs are coloured black. He is armed with two transparent light blue escrima sticks.

Nightwing reappeared in 2014 with a minifigure based on his appearance in The New 52. The minifigure reflects newer design standards, including more detailed chest muscles and animated expressions: a grin and a scowl. The logo on his chest has been changed considerably. It is larger, red rather than blue, and dips back up in a centered point before slanting downwards again. Light grey lines representing armour seams are also visible.

This time around, he also has back printing which includes the wrap-around of his logo, shaped like a "v", as well as a continuation of the seams.

In 2013, a Nightwing microfigure was included in 50003 Batman. He has a blue base. He is designed similarly to his Batman counterpart, but with an angry expression and hair printed directly onto his head.

In LEGO Batman: The Videogame, Nightwing has his appearance from 7785 Arkham Asylum. In LEGO Batman 2: DC Super Heroes he was slightly updated with backprinting. Some promotional images for the downloadable content also show him with the serious, smirking expression used by the modern Robin minifigure and Hawkeye.

In LEGO Batman, Nightwing armed with his escrima sticks and is able to use Robin's super suits which will change his appearance and give him extra abilities on top of his basic ones; grapple, a batarang, and acrobatics (which allow him to walk on tight ropes faster than all other characters, except for Ra's Al Ghul). The water suit gives Nightwing blue legs, a yellow oxygen tank, black flippers, and a black helmet with a red visor so that he can dive underwater and can use freeze batarangs once the upgrade is purchased. The magnet suit colours his legs and arms dark grey, attaches grey magnets to his feet, and a large, red magnet to his back. This suit allows Nightwing to walk up certain walls and the speed is increased once it is upgraded. When using the technology suit, Nightwing's legs and arms are coloured silver and two green antennas and a blinking green light are on his back. This suit allows him to activate special panels and leave behind "Nightwing" decoys after it is upgraded. Lastly, the attraction suit has Nightwing's normal costume, but with a yellow and red canister attached to the back that counts the number of loose, red, yellow, or green pieces he has picked up with the matching hose. When upgraded, this suit attracts the pieces faster and gives directions to where pieces are hidden.

Nightwing's escrima sticks, grapple, and batarang abilities return in LEGO Batman 2 and he is described as having an acrobatic fighting style. Robin's super suits return, and Nightwing is still able to use them, though it changes him into Robin in that respective suit. On the portable versions, he also has the stealth ability.

As a child, Dick Grayson was part of a circus act known as The Flying Graysons. One night, his parents were murdered during the act. Dick was then adopted by Bruce Wayne, the better known as Batman, who recruited Dick to become his crime-fighting sidekick Robin. After years of serving as Robin and working with Batman and Batgirl, Dick grew tired of being overshadowed and chose to strike out on his own. Around this time, he formed the Teen Titans with other sidekicks and young heroes, such as Kid Flash, Wonder Girl, Cyborg, Raven, Beast Boy, Starfire among others and fought villains such as Deathstroke, Brother Blood, and even Trigon the Terrible. His responsibility as leader of the Titans reached a point where he wasn't able to dedicate time to his other role as Batman's sidekick. After talking with Superman, he learned of the Kryptonian legend of Nightwing, who was a vigilante shunned by his family. Dick adopted the name and retired his Robin mantle, which would be used by Jason Todd later, therefore dedicating himself to be the Titans' leader full-time.

Nightwing is a member of the Bat-family which primarily consists of Batman, Robin, Red Hood, Red Robin, Alfred Pennyworth, Batgirl, and Commissioner Gordon. He has joined several incarnations of the Justice League and the Outsiders, as well as occasionally assisting the Birds of Prey and newer line-ups of Teen Titans.

In the New 52 when the Crime Syndicate came from their Earth, they exposed Nightwing's identity. In an attempt to stop the Syndicate, Batman and Lex Luthor fakes Dick Grayson's death. Unable to return to being Nightwing, he became a secret agent working for Spyral.

In Rebirth, Dick Grayson returned to the mantle of Nightwing. However, Grayson was later shot in the head, and is currently suffering from amnesia. He does not remember ever being Nightwing, or even knowing anyone from his past. He also goes by Ric instead of Dick.

In LEGO Batman: The Video Game, Nightwing can be purchased on consoles for 125,000 studs, making him the third most expensive character in the game behind Hush and Ra's Al Ghul.

Nightwing played no role on console versions of the game, but in Free Play served as an alternate Robin, the only difference being Nightwing walks faster on tight ropes and has different attacks.

Nightwing reappears in LEGO Batman 2: DC Super Heroes with downloadable content on Xbox 360 and PlayStation 3. He also appears in the hand-held versions of the game, and is available for purchase after finding the second minikit in the seventh level, The Batcave. He costs 300,000 studs.

Nightwing appears in a post-credit scene with other minor heroes of the Justice League appear through the Watchtower's teleportation doorway, Marvel Avengers-style. He hangs from the top in a Spider-Man like fashion.

In the character list, he is also portrayed with his own 1966 Batman theme.

Dick Grayson™ spent his early childhood as a trapeze artist. Following the tragic deaths of his parents, he was taken in by Bruce Wayne™ (Batman™). He soon became Batman’s protégé and crime-fighting partner as the original Robin™. An expert acrobat and martial artist, Dick Grayson™ eventually left the nest and ventured out on his own as a new hero called Nightwing™. His years with Batman made him a keen detective, natural leader and strategist. Although he’s a skilled fighter in his own right, he often uses Escrima sticks and high-tech gadgets in his fight for justice!

Robin has become…Nightwing! When a sidekick has been through enough battles and helped to defeat enough Super-Villains, they can sometimes graduate to a new super-heroic identity and go out and fight crime all on their own. Or they can just go through Batman’s collection of Batsuits and throw something together in their first week on the job. That’s what Robin did when Batman went missing. Nightwing is just as young and inexperienced and enthusiastic as the regular Robin, but now he’s also got a costume that’s way, way too heavy for him. Good luck out there, kid!

Bat-Fact: If he doesn’t put my stuff back in the Batcave where he found it, he’s grounded.

Nightwing and Deathstroke in the 3DS version of LEGO Batman 2: DC Super Heroes 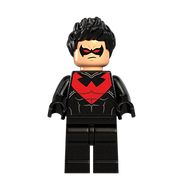 Traveller's Tales: teasing us with a DC/Marvel crossover in the most aggravating way.