The Nindroid Drone, like the Nindroid Warrior, is a mechanical soldier modeled after Zane. They have been created by the Overlord to be stronger, faster, and more agile than Zane and to lack emotion to be more efficient drones, hence their name. They normally wield two silver sais in the sets that they appear in. 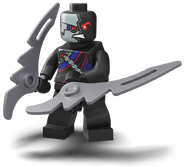 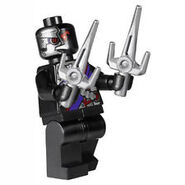