Ninja is a LEGO theme based around the Samurai and Ninjas of feudal Japan. It ran from 1998 to 1999, with additional figures created for the Mini Heroes Collection one year later, in 2000.

It is frequently considered to be a subtheme of Castle, as the traditional European-style medieval sets were discontinued the year prior, and the Ninja packaging sports the same shade of orange as the Castle boxes throughout the 1990s. Ninja accessories were also included in 10066 Castle Accessories released in 2002. However, the line was never explicitly advertised as a Castle theme by LEGO.

The Ninja line draws visual inspiration from feudal Japan and oriental architecture in general. However, the presence of firearms (flintlocks, muskets and cannons) sets the line in a somewhat amorphous historical period. Interesting new elements for the Ninja line include samurai helmets and armour, ninja hoods, katana swords, and ornamental fish statues.

Shogun Gi-Dan leads the Shogun's Defense to protect his treasure. Among his allies is Grey Ninja Ito. The Shogun is threatened by Bandit Chief Kendo and his band of Robbers, aided by Dark Ninja Bonsai.

Notably, this story does not seem to match the actual models, where the red ninja are clearly shown serving the evil emperor - for example, they man his boat in 3050 Shanghai Surprise. Their home base, 3052 Ninja's Fire Fortress, is also emblazoned with the emperor's symbol.

The story is laid out in the January/Febuary 1999 issue of Bricks n' Pieces Magazine:

For years, peace has reigned across the land thanks to the wisdom and power of Shogun Gi-Dan. He has ruled with an iron fist - helped by his loyal Samurai warriors, the trusted and noble Grey Ninjas.

They have fought to keep the unruly bands of robbers at bay by threatening war if they dare steal the Shogun's treasure.

But now the Bandits have a new leader - the cunning and dangerous Chief Kendo, who will stop at nothing to get his hands on the precious loot!

The 1999 Ninja launch in the UK was in fact the same product line that had debuted in 1998 in the US, and it appears the UK marketing team borrowed heavily from the US story. Names and roles are copied over, with only the sillier elements of the US character descriptions being omitted (pizza-slinging shogun, we hardly knew ye). Even the LEGO Maniac comic featuring Ninja is copied over into the Jan/Feb issue of Bricks n' Pieces - although this was common practice at the time.

In a 1999 commercial, the red ninja army, the white ninja, the emperor from the 1999 wave, and the shogun from the 1998 wave are all shown to be allied against the robbers, who are led by the robber figure wearing a black samurai helmet.

The May/June 1999 issue of World Club Magazine includes a story that details some of the names and roles of the Ninja characters in Germany. The shogun character is known as The Old Shogun. He is accompanied by a bodyguard, the 'Ninja Shogun.' The leader of the robbers, as in Japan, is the helmeted robber figure, going by the title of 'Ninja Bandit.'

In 2000, after the main Ninja line had been retired, LEGO produced three packs of Ninja figures as part of the Mini Heroes Collection. These introduced a new Shogun Warrior character in red (set 3344), as well as two matching samurai (Old Samurai and Young Samurai) for him to lead (set 3346). Two Green Ninja accompanied the emperor minifigure from the 1999 wave in set 3346. Here, the 'emperor' is described on his card as a "fair and righteous" Samurai Lord.

Four (circa) 1999 Ninja mini-sets were available, sold as promotions from Kabaya, a Japanese candy company. This the sets in this group had two different stock numbers. 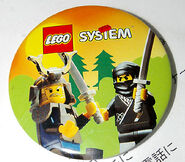