Ninjago: Masters of Spinjitzu is a TV series released in 2011. The first two episodes were aired in the US on Cartoon Network, in Germany on SuperRTL and in Finland on Nelonen. The show is about the popular theme, Ninjago. Four ninja- Kai, Zane, Cole, and Jay must defeat Lord Garmadon and the evil Skulkin army, with the help of Sensei Wu and Kai's sister Nya. The pilot episodes was split into two parts, Way of the Ninja and King of Shadows. When it was released on DVD it became four episodes (Way of the Ninja, The Golden Weapon, King of Shadows, and Weapons of Destiny). The theme song is "The Weekend Whip" by the band The Fold. The Fold has also done Born to be a Ninja and Ninja Go!. Season one had 13 episodes, and followed the ninjas' quest to stop the evil Serpentine. The second season continued with the ninja training the green ninja to defeat Lord Garmadon once and for all. Music and sounds are done by Jay Vincent and JAM Music and Effects.

Pilot Episodes (4 episodes) of the show features an aging ninja master, Sensei Wu, struggling to train four young Ninja in the ways of an ancient battle art called Spinjitzu to defeat his evil brother Lord Garmadon, ruler of the underworld, and stop him from gaining The Four Golden Weapons, which would make his power limitless.

Season one (13 episodes) The first part focuses on Garmadon's young son Lloyd Garmadon, who has released an ancient evil: an army of snakes called the Serpentine. The four ninja must stop them from uniting to unleash The Great Devourer, a huge snake with the power to consume all of Ninjago and a bite that can turn people evil. Also, the Serpentine hold Lloyd as a hostage, and Lord Garmadon has agreed to aid the ninja in rescuing Lloyd and stopping the Serpentine.

Season two (13 episodes) features the Ninja training Lloyd to become the chosen one destined to defeat Lord Garmadon. Meanwhile, the Dark Lord forms an alliance with the Serpentine and, with the Golden Weapons in his possession, attempts to prevent his son from fulfilling his destiny. In the meantime, several forces of evil are unleashed such as ancient pirates of the Destiny's Bounty and the formidable "Stone Army", of which the Ninja must protect Ninjago from becoming plundered. The second part is planned to air in Asia before airing in America.

It is often said that the pilot episodes and Mini-Movies are the series first season. The original first and second seasons were considered there seasons two and three on Xfinity TV guides. However, this has recently been changed to the original numbers.

The Green Ninja from the "Ninjago: Rise of the Snakes" trailer

The final scene of Day of the Great Devourer

Zane's face is back to normal, yet missing an eyebrow, as noted above 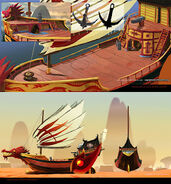 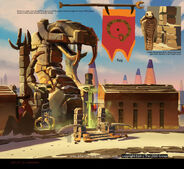 Lloyd getting knocked down

Jay onboard The Black Bounty

Jay on a motorcycle in Season 3 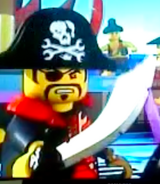 A preview photo of Season 2

The Two Sides of Ninjago Revealed

Start a Discussion Discussions about Ninjago: Masters of Spinjitzu