The Ninjago Royal Family was a royal family in Ninjago: Masters of Spinjitzu.

The royal family ruled over Ninjago City for an unspecified period of time, despite being no apparent relation to the First Spinjitzu Master. By the time of the six Ninja, they had become a largely ceremonial institution with very little, if any, political power or influence, and mostly kept themselves secluded from their subjects.

The Emperor of Ninjago (voiced by Richard Newman) was the ruler of Ninjago and the adopted father of Harumi. First appearing in "The Mask of Deception", he and his family come out of their usual reclusiveness to address the citizens of Ninjago in the midst of fears about the Sons of Garmadon. They later invite the Ninja into the Royal Palace to help protect the Mask of Deception. In "The Jade Princess" the Emperor and his wife become upset upon learning that Harumi left the palace and was in the company of Lloyd, feeling that interacting with such a commoner was beneath her. During the subsequent attack by the Sons of Garmadon on the palace, the Emperor is thought to have perished along with his wife and Hutchins.

After Garmadon was purged of his evil, he bowed before the Emperor and was pardoned in a public ceremony while the Emperor's wife and adoptive daughter accompanied him.

The Empress of Ninjago (voiced by Ellen Kennedy) was the wife of the Emperor of Ninjago and the adopted mother of Harumi.

After the attack of the Great Devourer, the Empress and the Emperor found out about Harumi and her situation through television shows and decided to adopt her as they felt sorry for her and have been wanting a heir to the throne for a long time but for unknown reasons they were unable to have a child of their own. The Empress and Emperor raised Harumi as their own and made sure to turn her into a princess the citizens of Ninjago could be proud of while providing her with any material good she desired, completely unaware that Harumi hated them and hated being a princess.

She came out into the light in response to a rise in crime in Ninjago. She and the Emperor held a press conference to share this news. The Ninja were then assigned to protect the Oni Mask in the palace. However, the Sons of Garmadon attacked the palace in an attempt to get the Mask of Deception. Harumi escaped and after the attack, asked what had happened to the rulers of Ninjago and her guardian, Hutchins.

For other uses of this name, see Royal Guard (Disambiguation).

The Royal Guard of Ninjago is an organization dedicated to protecting the Emperor and Empress of Ninjago, their adopted daughter Harumi, and the Royal Palace. Led by Hutchins, the Royal Guard worked to secure their various charges, but were decimated in an attack by the Sons of Garmadon in "The Jade Princess." 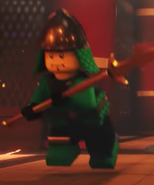