Nizam was a Prince of Persia minifigure that was released in 2010.

Nizam wears a black robe with golden patterns going down, in the middle there's a purple belt with a large gold buckle.

Nazim was the trusted adviser to his brother, King Sharaman. When he and Sharaman were hunting when they were children, they did not that know they were being hunted by a lion. Nizam saved his brother's life. If he hadn't, he would have become king for a lifetime, so he went on a quest to find the Dagger of Time so he could undo what he did all those years ago. He is the adoptive uncle of Dastan, and used his trust in order to cause the invasion of Alamut. 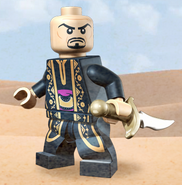 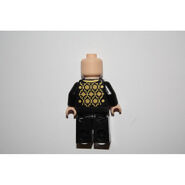 Backprint
Add a photo to this gallery