Although his Jolly Roger Bicorn is shared with Captain Brickbeard from the concurrent Pirates theme, Nobeard's minifigure features unique facial and torso printing. He bears an eyepatch and some stubble, and he wears a blue naval jacket over a torn white shirt. He is frequently depicted carrying a cutlass or jewels.

Nobeard is the estranged son of Captain Redbeard, who banished him for his inability to grow a beard. Seeking the respect of his famous father, Nobeard formed his own pirate crew called the Nobeards, consisting of other pirates who lack facial hair. He used to be friends with Royal Feather, although their friendship has since ended due to their respective occupations.

In LEGO Quest & Collect, Nobeard is a magic attacker with the skills Jewel Mine, Jewel Blast, and Freeze Removal. 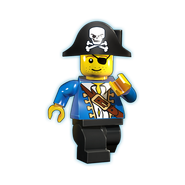 Community content is available under CC-BY-SA unless otherwise noted.
... more about "Nobeard"
RDF feed
Accessories
Bicorn with Jolly Roger, Cutlass, Jewel +
Appearances
6192 Pirate Building Set
LEGO Quest & Collect +
ArticleRating
unrated +
Image
Pi102.jpg +
InfoboxTemplate
Minifigure +
ShopDescription
NAME: Nobeard
THEME: PIRATES … NAME: Nobeard<br/>THEME: PIRATES<br/>Banished by his father, Redbeard, for not being able to grow a beard, Nobeard set about assembling his own motley crew of pirates, to earn the respect of his father. Raucous and rowdy, the only rule of the Nobeards is that no beards are allowed. This worries Nobeard as he recently started growing stubble!rd as he recently started growing stubble! +
Theme
Creative Building +
Title
Nobeard +
Years
2009 +
Advertisement