"Fear me, for there is no stopping me."
―Nuckal

Nuckal is a Ninjago minifigure introduced in 2011 within three sets, 2173 Nuckal, 2504 Spinjitzu Dojo, and 2518 Nuckal's ATV. He is the Skulkin General of Lightning formerly under Samukai's command and later under Kruncha's command.

The childish and unintelligent General of Lightning, Nuckal serves under the command of Samukai alongside his companion General Kruncha (whom he often fights with) and commands the skeletal legions of Lightning. He made his first appearance in Ninjago: Masters of Spinjitzu where he was seen laying siege on Kai and Nya's village, and snuck off to find the map to the Golden Weapons with Kruncha. Later he assisted in the mining of for the Scythe of Quakes at the Caves of Despair and also captured Cole, Zane and Jay at the Fire Temple while Garmadon seized the Sword of Fire. Eventually, he and Kruncha traveled back to the Underworld and guarded passage to Lord Garmadon's fortress, where Nuckal performed "Ninja Searches" on all cargo entering the fort. They were both imprisoned, however, when the ninja performed the "Tornado of Creation", which locked the remaining skeleton army into a Ferris wheel-like prison, the two generals amongst them. In the Masters of Spinjitzu minisode, the two somehow escape their predicament and use the skull truck to travel to the Monastery and stole the Golden Weapons from the ninja, but the plan backfired and the weapons were returned shortly. The generals soon joined up with Wyplash and a few other remaining skeletons, and banded together and traveled to the Fire Temple. At the temple, they discovered a hidden entrance to the Underworld, where they attempted to release more skeletons and gain vengeance for Samukai. However, Kai and Nya apprehended their plan and caused the skeletons to retreat, trapping Kruncha and Nuckal out of the Underworld in the process. In Never Trust a Snake, Nuckal and Kruncha appeared as "substitute teachers" for a boarding school for bad boys, but were tied and gagged by Lloyd Garmadon and Pythor P. Chumsworth when they invaded the school. They were freed by Cole, but made them promise to leave Ninjago. He appears with his friend Kruncha in the episode Tick Tock playing rock, paper, scissors, until they see Sensei Wu and is scared off by him. He next appears in "The Royal Blacksmiths" in the crowd during the Ninjago Talent Show, booing the ninjas next Kruncha. He also appears with Kruncha in the Episode "All of Nothing", when Lord Garmadon sends the Skullkin at the Serpentine. He made an appearance in "Day of the Great Devourer" participating in the "Take back Ninjago Rally" wearing a hat with fruits, while dancing to "We want the Snakes to Slither away!". In "Ninjaball Run", where he and Kruncha drove the Skull Truck. They shot out a hand with a chain to grab onto Lloyd's Ultra Dragon. Lloyd was spun out, but the truck was still connected to the dragon, via the chain. They were pulled across a tree and were spun out of the race. In Wrong Place, Wrong Time Nuckal sees both the Kais, but says nothing. He has never been shown to drive the skull truck. 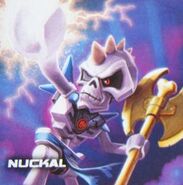 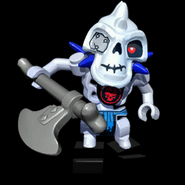 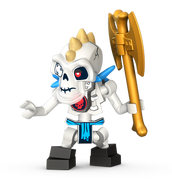 Nuckal
Add a photo to this gallery