"Don't worry, you'll feel all better after this!"
―Nurse

The Nurse is a minifigure introduced in 2010 as part of 8683 Minifigures Series 1. She comes with a syringe and clipboard.

The nurse has dark brown hair in a ponytail. She has a friendly smile with pink lipstick. She has a white torso with an outlined blue collar, a black zip and outlined blue pockets, as well as a Star Of Life symbol on her top pocket and a nurse's watch pinned to her shirt. She has white legs, hips and arms. Her flesh tone is yellow. She comes with a grey syringe and clipboard as her accessories.

In an animation on the LEGO Collectible Minifigures website, she does a tango dance duet with the Zombie but ends up knocking off his head, and then his torso. She is a little shaken, but at the end of the dance number the Zombie is re-assembled, and they finish with a tremendous applause from the crowd which is mostly made up of other minifigs from the theme. 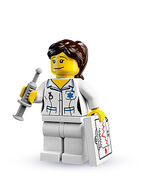 Deutsch Français
Community content is available under CC-BY-SA unless otherwise noted.
... more about "Nurse"
RDF feed
Accessories
Syringe (Light Stone Grey)
Clipboard +
Appearances
8683 Minifigures Series 1 +
ArticleRating
4 +
Image
Ns1!.jpg +
InfoboxTemplate
Minifigure +
ShopDescription
“Don’t worry, you’ll feel all better af … “Don’t worry, you’ll feel all better after this!”</br></br>Cheerful, professional and devoted to making people feel better, the Nurse believes that everybody around her ought to be as healthy as possible at all times, even if that means covering them from head to toe in bandages and checking every reflex in their body with a little rubber hammer. She can tape up a boo-boo, dash to the scene of an accident with a wheelchair or build a fully-functional MRI machine out of random spare pieces, all in a dizzying blur of motion…whether her chosen patient wants her to or not!</br></br>The Nurse thinks that every problem can be solved by expert medical care. If she sees a child crying because its balloon is stuck up in a tree, she’ll try everything from checking its temperature to taking X-rays, trying more and more complicated procedures when nothing seems to solve the problem. She doesn’t understand why the tears stop as soon as she gives the child a new balloon for being such a good patient, but she’s proud and delighted that her treatment worked anyway.elighted that her treatment worked anyway. +
Theme
Minifigures
Series 1 +
Title
Nurse +
Years
2010 +
Advertisement