OGEL Island (written as Ogel Island in the second game's manual), also referred to simply as OGEL, is the Brickster's customized island in space. It was featured in all versions of LEGO Island 2, although it was first mentioned in the manual of the first LEGO Island game.

According to the LEGO Island manual, when the Infomaniac told the Brickster he was going to make a new minifigure friend, the Brickster went insane with jealousy. He stole some bricks from LEGO Island and left to build his own island, which he named OGEL. As revealed in LEGO Island 2, the island is actually in space, unlike LEGO Island, Castle Island, or Adventurers' Island. When the Brickster deconstructed the buildings of LEGO Island, all the bricks supposedly went to OGEL.[source?]

The Brickster's structures rest on an island-shaped asteroid that floats near the Earth. OGEL Island only had a handful of buildings built from pieces stolen from LEGO Island, although bricks from Adventurers and Knights' Kingdom also appear to be present. It featured a colourful landing pad that ships and shuttles would probably land on if it were occupied. The landing pad has many holes in it; if Pepper Roni falls off OGEL Island, he lands back on the landing pad. On one "peninsula", there was only a strange monolith, around which a troupe of space monkeys danced. On another peninsula sat the Space Port with the Brickster's Fish Ship. On the last peninsula, the OGEL Pizzeria sits. On the plateau on top of OGEL Island stands the Brickster's Palace, Brickster's home on OGEL. Energy crystals can also be found on OGEL Island, acting as the island's collectible item.

The citizens of OGEL Island are mainly mutants. Along with Brickster-Bots, other citizens include a head in a hovercraft vehicle, a mutant centaur astronaut, a scorpion skull flower creature, a floating snake, Slimy Slugs, a 2D floating head with a cape and floating hands, and dancing monkeys. There are numerous Rock Monsters orbiting OGEL Island in the asteroid field.

Although their scene was cut from the final game, Cedric the Bull and Mr. Hates were planned to appear on OGEL Island as the Brickster's partners. 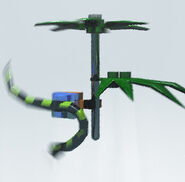 Work-in-progress image from the Brickster's Palace