Orm Marius was born in the ancient underwater city of Atlantis, and because of this he possessed a physiology far superior to regular humans. He was the son of the Atlantean military chief, Orvax Marius and the queen of Atlantis, Atlanna. He was raised to believed that the people of the surface were cancerous and not to be interacted with.

His father Orvax was extremely abusive and would come to be killed by Atlanna on Orm's 12th birthday. Later on in his life Atlanna was killed in a supposedly freak accident and Orm was accused by Atlanna's royal advisor Vulko, this led to the advisor being banished to the surface world. Following this, Orm became king of Atlantis.

Eventually, his half-brother Arthur Curry traveled to Atlantis with Vulko, and Orm happily stepped down as King so his brother could take the throne. The brothers would start out with a healthy relationship, but Orm's extremist hatred of humans came to clash with the views of his brother. Orm took up the identity of the Ocean Master and made repeated attempts at killing the human-race and reclaiming the throne of Atlantis. 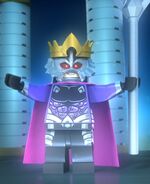