Oliphaunt Mahûd Leaders travel on Oliphaunts and "drive" or "steer" them during battles. Each of them is also supervising the Haradrim Warriors in the tower. In The Lord of the Rings: The Return of the King during the Battle of Pelennor Fields, the Haradrim charged through the Rohirrim with their oliphaunts. A Mahûd Leader on one of the oliphaunts steered it toward Éomer. Taking his spear, Éomer threw it up and made a direct hit that took down the Mahûd Leader. He fell down, dragging the tower and everyone in it with him. In LEGO The Lord of the Rings: The Video Game, Mahûd Leaders are usually defeated if a character such as Legolas, who can jump, climbs up there and defeats them with the rest of the warriors in the tower. 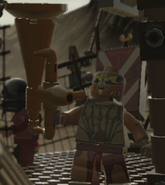