Oliver Wood is a Harry Potter minifigure. He was introduced in 2010.

Once he left Hogwarts in Harry Potter and the Prisoner of Azkaban, Oliver became a reserve keeper for Puddlemere United. His worst enemy was Slytherin captain Marcus Flint.

Oliver Wood returned to Hogwarts to fight in the Battle of Hogwarts alongside his former school friends and teammates. 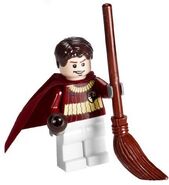 Wood with his broomstick.

Wood on his broomstick.

Wood as he appears in LEGO Harry Potter: Years 1-4

Wood before a Quidditch game. 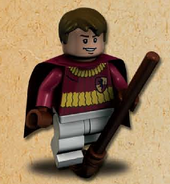 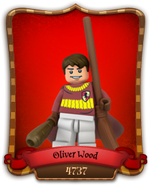 In LEGO Harry Potter: Years 1-4, Oliver has his same face and hair-piece as the physical minifigure. However, he has the 2002 Gryffindor Quidditch robes recoloured bright red and white legs with knee pads.