An Olog-hai, also known as a Mountain Troll, is a character that appears in LEGO The Lord of the Rings: The Video Game.

Olog-hais were bred by Sauron in the late Third Age, possibly for the same reason Saruman bred the Uruk-hai, for improvement and less vulnerability to sunlight. They lived primarily in Mordor and in southern Mirkwood. However, they participated in the Battle of the Black Gate, where Pippin saved his friend Beregond from one. It is possible that some Olog-hai were also present at the Battle of the Pelennor Fields.

The Olog-hai were taller than a Man, and covered in spiky scales, carrying war hammers, large swords, or spiked maces, and bucklers, and having claws and, on occasion, tusks. After the War of the Ring, all of the Olog-hai were killed. 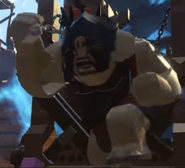