Oola is a Star Wars minifigure released in 2012.The minifigure appears in the set 9516 Jabba's Palace.

Oola has a lime green legs with a black hip joint. Black printing is present on the front of the legs to depict the black net costume Oola wore as Jabba's slave in the Star Wars universe, and the printing also depicts three leather strips (two on the right leg, one on the left), which were used to hold the costume together. The torso piece is also lime green, with the black costume continued on both the front and the back of the torso. A leather strap is printed at the bottom of the piece on both sides, as is a silver chain around the neck area. Black and dark green printing is also used for outlining and detailing on the piece. The lime green head piece is double-sided, with one side featuring a scared expression consisting of an open black mouth with white teeth and red lips, two black dot eyes with white pupils, black eyelids with pink eyeshadow, and black eyebrows. The other side of the face has the same features, but the mouth is instead a closed smile showing teeth, and the eyebrows is a more relaxed position. Oola also has a piece on top of the head for her lekku and headgear, a piece which was previously only ever used on Aayla Secura. This piece is lime green, with the headgear area being black with silver printing for decoration on the front, and two silver circles on each side. The lekku themselves are plain and feature no printing.

Rather than the customary dancing veils, Oola was given only a flimsy net costume to wear, loosely held together by narrow leather strips. Jabba was immediately enamored with her, and chained her by the neck to his throne as his uwitting personal property and slave girl. Oola was forced to dance for him, as well as give pleasure when the depraved crime lord beckoned, but she was determined to escape from her horrible existence, one way or another. Despite her horrible life in the palace Oola like many others was an accerory to her master's crimes.

Oola sat right beside Jabba when two droids entered the room to deliver message from Luke Skywalker. Oola alone with the rest of characters in the palace watched and listened to the message from the Jedi as he offered a bargain with Jabba which didn't work. Oola sat feeling embarrassed, nervous and bored about being a slave girl for crime lord. She was afraid of what Jabba was going to do and reflected on her impressement this was not the life she was promised.

Later that day, Oola was able to speak briefly with C-3PO, who told her that Luke was indeed going to return to rescue them, and her hope was renewed. Her spirits high for the first time since her imprisonment, Oola performed the best dance of her life, which unfortunately would also be her last.

Enticed by her performance, Jabba pulled on her chain, wanting more than dance from her. Having suffered such invitations before, Oola arrogantly refused, grabbing her end of the the leash in foolish attempt to try to refuse Jabba which learned later on would be a mistake. As she hauled back on her chain in fear and pleaded with Jabba, he became angry and tugged harder, bringing her over the trapdoor in front of his throne. He grew bored with her resistance and opened the trapdoor where she was eaten alive by Jabba's rancor after Jabba dropped her into the rancor's pit. Her legend, however, would live on in the form of impersonator Dame Needa, who put on a nightly Oola tribute show at the Gardulla Oola hotel and casinoin Mos Eisley. 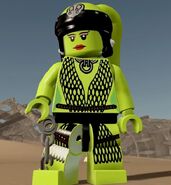