Operation Land Ho! is the ninth episode of the sixth season of LEGO Ninjago: Masters of Spinjitzu, as well as the sixty-third overall in the series.

As Jay falls from the sky into Ed & Edna's Scrap 'N' Junk, he is found by Ed and Edna, who debate on whether or not to help him. Edna asks Jay what happened to him, and leads him into their trailer.

Meanwhile, Doubloon and Monkey Wretch are preparing Nya for the wedding, with her being resentful towards Nadakhan and claiming she will not marry him. Just then, Dogshank returns from Tiger Widow Island and sends Squiffy and Bucko to find Jay. She then enters and forces Nya into her dress: in addition, she finds the Tiger Widow venom and orders Clancee to dispose of it.

Back at the junkyard, Jay relays his story to his parents, remarking that it is up to him alone to save Ninjago. Ed scolds Jay, telling him that he doesn't know a boy from a junkyard who can't scrap up a few friends when necessary. Jay realizes this, and flies away from the junkyard on his dragon. He first recruits Dareth who has been struggling to find new talent since the Ninja's' disappearance and eagerly accepts. Jay then finds Captain Soto, Skylor, Echo Zane, Ronin and the Commissioner (the latter arresting Ronin who has gone back to being a thief despite receiving a clean record) to help him.

They gather in the police department and Jay explains the situation and its solution, calling it "Operation Land Ho." The plan consists of the group getting a ride on a piece of land being used for Djinjago, then Jay will use his final wish to turn Nadakhan into a mortal. However, they are overheard by two of the Djinn's spies, who hurriedly escape. Squiffy is caught by the Commissioner, but Bucko gets away.

The group gets on to Djinnjago and Jay sneaks outside of Nya's room. Jay tries to get in but Nya claims the window bars will not budge. Nadakhan comes in and Jay attempts to make his wish but fails. Jay's team is attacked by Nadakhan's soldiers as the wedding begins. They hide in a wooden shack after Jay obtains the Sword of Souls.

Captain Soto says that Jay can rescue the other Ninja trapped inside, but is not guaranteed that he will be able to get out. After Echo Zane gives Jay entry, the latter finds the other Ninja, as well as Misako, cast under a spell rendering them unconscious. Meanwhile, the rest o the team is ambushed by Nadakhan's soldiers. Ronin gives each of them a simple tool to defend themselves, which they all manage to do. Back in the sword, Jay has woken up the inhabitants, and they escape from the sword, making it out just in time. Their exit causes an explosion which tears the shack apart, effectively getting rid of nearby guards. As the two groups reunite, Wu asks if everyone is safe; Jay responds by saying that one Ninja remains to be rescued and asks who wants to crash a wedding, which is met with multiple cheers. 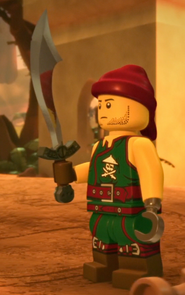