The Orc Warrior[1] is a Castle minifigure introduced in 2008. He is generically referred to as a Troll Warrior in set descriptions.

As one of the Troll Warriors, the Orc Warrior battles the Crown Knights and Dwarves of the Western Kingdom of Ashlar. The Orc Warrior partakes in the Tower Raid, using a rolling siege tower to free an imprisoned Troll Warrior. He also carries a whip aboard the Troll Warship, most likely for whipping the Giant Troll or other trolls into compliance.

The Orc Warrior is loyal and brave, and he enjoys brutal battles and displaying his incredible strength. However, he fears magic and tends to cry after watching sad movies.[1]

In LEGO Quest & Collect, the Orc Warrior is a Physical Defender hero with the skills "Warrior's Frenzy", "Warcry", and "Poison Removal". 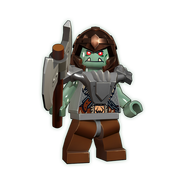