Orcas or Killer Whales are LEGO animals introduced in 2002.

Orcas are large aquatic mammals in the Sonic the Hedgehog series. These large, non-anthropomorphic animals populate seas and coastal parts around the earth. In numerous games since Sonic Adventure, Orcas appear as large obstacles that pursue Sonic the Hedgehog through many beach oriented Zones, most notably Emerald Coast. Depending on the game, the sequences with Orcas may include automated spectacles. 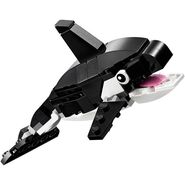 The DC villain of the same name.