Orion is a DC Universe minifigure who first appeared in LEGO Batman 3: Beyond Gotham.

Orion was the second son of Darkseid; dictator of Hellish Apokolips. He is the half-brother of Kalibak and Grayven. He later went on to marry Bekka, the daughter of Apokolips Resistance leader Himon. As a child, Orion was traded to New Genesis' benevolent leader Highfather for his own son Scott Free, in The Pact between New Genesis and Apokolips. Raised as the son of Highfather Izaya, he was taught to control and focus his rage and Orion grew to deeply value his adoptive home and its ideals. His inherited traits and learned focus allowed Orion to become the most powerful warrior the New Gods had ever known. This in itself was not an easy task given that his heritage boiled with the rage of the brutal and merciless Darkseid. Learning how to control his dark nature consumed much of Orion's youth. But his friends among the New Gods, particularly Lightray, helped him direct his Dark Side toward the protection of his adopted homeworld New Genesis. Orion counts among his closest friends Lightray, Metron, Jezebelle, Scott Free, Big Barda, and Forager. He is a hero dedicated to the ideals taught to him by his adopted father Highfather of New Genesis. His fighting skill, stamina, relentlessness, and ruthlessness have earned him the nickname "The Dog of War".

Orion has served two terms with the Justice League. He first demanded to join the League alongside his friend Lightray. They were accepted as Leaguers and stayed on until after the battle with the Evil Eye. Later, Orion and Big Barda were sent as agents of New Genesis to serve in the JLA. During his time in the League, Orion helped to defeat Starro when its actions put almost the entirety of North America to sleep and aided Green Lantern, Steel, Plastic Man, and Barda in capturing a White Martian that had regained its original memory. On one occasion, Orion and other Leaguers were abducted by the temporarily insane Adam Strange as part of a plot to defeat a telepathic race. Steel was forced to steal Orion's Mother Box and use it as a telepathic shield. Orion was so enraged that his Mother Box was devoting too much energy and focus in keeping him calm to do anything else. Orion and Barda's central mission was to help mobilize Earth's heroes against the coming of the omnipotent, Old God tech-cosmic weapon known as Mageddon. Orion gave his Mother Box to Oracle for safe-keeping while he confronted Mageddon at full ferocity; channeling his inherited fury from Darkseid. Oracle used it to set up a telepathic, online network that could coordinate Earth's defending heroes as they fought to stop wars that Mageddon's mind controlling presence was inciting. Once Mageddon was defeated, Orion and Barda resigned from the Justice League.

Years later, Orion returned to Earth via Boom Tube for his final battle with Darkseid. During the celestial fight, Orion ultimately kills Darkseid by ripping his heart out. This created a firepit, like those on Apokolips, from Darkseid's chest cavity and fulfilling the prophecy of their final battle. As Darkseid died, a battered, wounded Orion walks away from the battlefield having "won" the battle against his father once and for all.

Darkseid's life essence endured the death of his body and fell back in time and space; fracturing both as he fell toward his own personal Hell inside a black hole at the center of creation. As Darkseid fell, his essence was briefly reborn on Earth as Boss Dark Side. Darkseid's Elite had been killed and their essences possessed human bodies as well. Using the super-villain Libra, Darkseid successfully unleashed the Anti-Life Equation onto humanity and in the process, dragged Earth outside time and space, threatening the entire multiverse in the process. From this point, Darkseid sought his revenge against Orion by firing a time travel-based gun backward in time to kill Orion once and for all. The bullet killed Orion, who by this point had realized that his father and his fellow evil New Gods still lived and were now possessing human beings as host bodies. With his last strength, Orion warns the man who finds his dying body, Detective Dan "Terrible" Turpin, that "They are not dead - He is in you all." His final command, appropriate for the Dog of War, is for humanity to "Fight..." before he finally dies.

Darkseid's murder of his son would ultimately backfire on him. Green Lantern John Stewart would recover the bullet that was used to kill Orion and give it to Batman, who would ultimately be forced to mortally wound Darkseid with the very same bullet Darkseid used to kill his own son; an irony that Superman pointed out when he described the murder of Orion as "suicide" on Darkseid's part, due to the fate of the bullet. 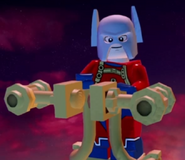 In LEGO Batman 3: Beyond Gotham
Add a photo to this gallery

Retrieved from "https://brickipedia.fandom.com/wiki/Orion?oldid=1936734"
Community content is available under CC-BY-SA unless otherwise noted.