Brickipedia
Register
Don't have an account?
Sign In
Advertisement
in: Class 4 articles, Animals, Minifigures introduced in 2010,
and 3 more
English

The Ostrich is an System Animal introduced in 2010. It has only appeared in one set, Prince of Persia: The Sands of Time's 7570 The Ostrich Race. In 2012, a DUPLO version of the ostrich was released, and included in two sets.

There are two variants of the ostrich, one from System, and the other one from DUPLO.

The first ostrich was released in the Prince of Persia: The Sands of Time theme. It is made out of two pieces. It has long light pink legs with pointed toes stretched out in a walking position. The legs are connected to the body which is mostly black. It has feathers on it, and has a white tail. The wings have white on the end as well. The body has four studs on top, so a minifigure can sit on it. At the end of the body, there is a place to connect the neck and head. The head is light pink and has rounded shape. The beak has two black nostrils on each side and black eyes with white pupils.

The DUPLO variant is visually similar to the System one, except it is all one piece and the eyes have a white background. There is one stud on the body to sit a DUPLO Figure.

In Prince of Persia: The Sands of Time

Several DUPLO Figures went on a safari and saw multiple types of animals, including ostriches. Some of them even rode the ostriches. 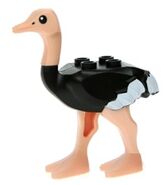 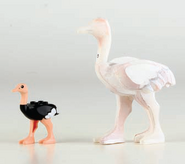 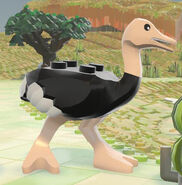 An Ostrich in LEGO Worlds.