Owl is an animal that appears in several LEGO themes. It appears in the Harry Potter, in the Kingdoms theme, and as a game piece 3836 Magikus. The White Owl from the Harry Potter usually represents Hedwig. The dark grey owl could also have represented the Weasley's family owl, Errol. There is a new owl mould that makes the owls more realistic than the previous owls, and features printing for the eyes and feathers.

New Molded Owl With No Printing 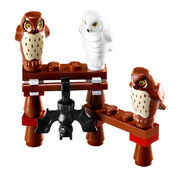